M, b. 17 February 1764, d. 15 October 1859
Dr John Maxwell was born on 17 February 1764 at Dundee. He was a surgeon. He spent 30 years in the West Indies, where he practiced as a surgeon. In 1817, Dr. Maxwell wrote to his brother, Capt. James, and sister Ann in Dundee of the sale of his Jamaican property "Woodlands" in the parish of Hanover for 4,000 pounds sterling. He also said that he sold his "Negroes" for the larger sum of 5,000 pounds. The 1817 Jamaica Almanac listing of proprietors and properties for Hanover Parish lists John Maxwell as having 69 slaves and 13 [live]stock. He married Elizabeth (Betsy) Stormonth, daughter of Rev. James Stormonth of Kinclune and Isobel Wedderburn, on 1 July 1818 at Dundee, Angus, Scotland; In her book, A Scottish Childhood Aunt Minnie writes: "Dr. John Maxwell, my grandfather, after nearly 30 years in Jamaica came home at the age of 52 with a small fortune, for such 800 pounds a year was accounted in those days...... He and Betsy Stormonth were married and became the father and mother of many children of whom my mother was the third." Dr John Maxwell died at Tay Street at age 95.

F, b. 20 September 1788, d. 1874
Elizabeth (Betsy) Stormonth was born on 20 September 1788. As of 1818,her married name was Maxwell. She married Dr John Maxwell, son of William Maxwell and Anne Ogilvy, on 1 July 1818 at Dundee, Angus, Scotland; In her book, A Scottish Childhood Aunt Minnie writes: "Dr. John Maxwell, my grandfather, after nearly 30 years in Jamaica came home at the age of 52 with a small fortune, for such 800 pounds a year was accounted in those days...... He and Betsy Stormonth were married and became the father and mother of many children of whom my mother was the third." Elizabeth (Betsy) Stormonth lived first at No. 4 South Tay Street and then at No. 23, in Dundee. She died in 1874.

F, b. 9 October 1753, d. 31 March 1795
Isobel Wedderburn was born on 9 October 1753 at Pearsie, Scotland. The Wedderburns claimed descent from King Robert the Bruce. Three Wedderburn brothers were credited with paving the way for the Scottish Reformation by the publication in 1567 of their bawdy anti-clerical work, the "Gude and Godlie Ballates". Other famous members of the family included a delegate to the first parliament of Charles II and a physician to the same monarch. Sir John Wedderburn, grandfather of Elizabeth Stormonth, was beheaded at Carlisle in 1745 for his allegiance to the Stuarts. Wedderburns had been Provosts in Dundee for over 100 years. As of 1786,her married name was Stormonth. She married Rev. James Stormonth of Kinclune on 2 June 1786. Isobel Wedderburn died on 31 March 1795 at age 41.

M, b. 21 September 1840
Dr Alexander Stormonth Maclagan Wedderburn was born on 21 September 1840. He married Annie Ogilvie, daughter of John Ogilvie and Annie (Anne) Maxwell, on 20 April 1865. Dr Alexander Stormonth Maclagan Wedderburn was a "doctor of Medicine, in practice at Forfar, for which county he was medical officer and also a justice of the peace".

M, b. 1872, d. August 1907
Charles Frederick (Fred) Balfour was born in 1872 at Valparaiso, Chile, South America. He lived in 1881 in Bristol at the home of Annie Ogilvie according to the 1881 English census. He was educated at Clifton College, Bristol, where he became head of the school. He received a scholarship to Corpus Christi College, Oxford, where he achieved a first in Classics. He also became a Rugby "Blue". He married Sybil Barker in 1895. Fred Balfour joined the Indian Civil Service and travelled to India where he eventually became assistant magistrate for the area around Agra and Oudh, south east of Delhi. Charles Frederick (Fred) Balfour died in August 1907; According to Minnie Ogilvie, Fred died at Lucknow "by his own hand" following the breakup of his marriage.

John Edwin (Jack) Scarlett was born on 23 February 1861 at Woodlands, West Toronto, Ontario, Canada. He emigrated before 15 April 1901 to California. He married Annie Elizabeth Byner in May 1905 at San Francisco. Jack was Secretary to the Standard Mining Company in 1905, a position he obtained through his friendship with Theodore J. Hoover(2nd icon) who, after graduating from Stanford University, became assistant manager to the Standard Company in 1903. Ted Hoover, (1871-1955) was a mining engineer, naturalist, educator and elder brother of US President Herbert Hoover. Ted received an A.B. degree in geology and mining from Stanford University in 1901. From 1903-1919 he was consulting engineer to the gold mines of California, western Australia, Mexico and Alaska. He was an engineer of lead and silver mines in Burma and of copper mines in Finland and Russia, and had offices in London and San Francisco. John Edwin (Jack) Scarlett appeared on the census of 15 April 1910 at Bodie, California, Head: John E. Scarlett, Mining Company bookkeeper, born in Canada to Canadian parents, living with his wife Annie, born in England of English parents and their two children Evelyn 4 and York 3, both born in California, where their parents had lived for 9 and 7 years respectively. He lived in January 1921 at Nam near Namtu, North Shan State, Burma, where he was employed by the Burma Corporation's mining operation (3rd icon). Famous for its Bawdwin and Namtu silver mines, it is situated on the Nam Tu River, and is connected to Lashio by rail. Jack later resided at 1 Burkes Road in Beaconsfield. He died on 18 October 1938 at Cheltenham, Glos., England, at age 77.

F, b. 1 May 1819, d. 10 November 1910
Isabella Maxwell was born on 1 May 1819 at Dundee, Forfar, Scotland. As of circa 1837,her married name was Ferguson. She married Dr John Ferguson, son of Charles Ferguson and Helen Fleming, on 12 June 1838. Isabella was a remarkable woman in many respects. Her life has been chronicled in the book: Dearest Isabella: The life and letters of Isabella Ferguson 1819 - 1910 by Prue Joske (available at alibris.com). The book is a fascinating account of the challenges and achievements of Scottish immigrants who left their homeland to make a new life in Western Australia. Isabella Maxwell was employer of William Forrest and his wife Margaret (nee Guthrie) who emigrated to Western Australia in 1842 as servants to Dr. Ferguson and his wife. In due course the Forrests became the parents of John Forrest, a great explorer, who became the first premier of W. Australia. For a detailed biography see the Australian Dictionary of Biography. She died on 10 November 1910 at Perth, W. Australia, Australia, at age 91.

Houghton Homestead: Built by John Ferguson in 1863, the house was owned and inhabited by the Ferguson family until 1976 when it was sold to the Emu Wine Company. Houghton is a registered historic house, open to the public. Image courtesy of Philip Wright and the Department of the Environment, Water, Heritage and the Arts, Canberra, ACT 2600, Australia.

Dr John Ferguson was born in 1802 at Kirkmichael, near Blairgowrie, Scotland. He was educated at Edinburgh University where he obtained his M.R.C.S. in 1822. From 1829 - 1835 John was in private practice in Auchtermuchty in Fife. He married Isabella Maxwell, daughter of Dr John Maxwell and Elizabeth (Betsy) Stormonth, on 12 June 1838. Dr John Ferguson lived at No. 8 South Tay Street. He emigrated to Western Australia with his wife and 2 children in the Trusty and landed at Leschenault on 6 December 1842. He intended to take up farming but his medical skill was soon in demand. He attended many settlers, also Aboriginals and convicts. He was named colonial surgeon in 1847. His use of chloroform when he amputated an Aboriginal's leg on 13 April 1848 was its first use in the colonies, and only 6 months after its first practical test in England. He also showed clinical acumen by warning the colonial secretary in 1852 that whooping cough in the Anna Robertson could be very dangerous to the Aboriginals who, having had no previous contact with the disease, were extremely vulnerable. He thus anticipated by many years hypotheses concerning immunity. In 1852 he was the medical officer for convict road parties working on the Perth-Fremantle Road. In 1861 he was on the Central Vaccination Board. In 1867 he acted as immigration agent and medical officer for the Perth poorhouse. He purchased an estate with 322 acres on the Swan River in 1855, which had been the property of a Colonel Houghton, and had a few grape vines on it; however, wheat was the main crop. When it was realized some of the land was suited to grape growing, new vines were planted. The first year's yield of wine was 25 gallons; as the Houghton wines became more popular, the Fergusons extended their operations, in 1903 establishing a bottling and distributing works. He was employer of several indentured servants who emigrated with them, including William Forrest and his wife Margaret Guthrie. The Forrests in due time became the father and mother of Lord Forrest, a great explorer who was to become the first premier of Western Australia. See Australian Dictionary of Biography for a detailed biography of John Forrest. Dr. John Ferguson died on September 11 1883 in Perth, Western Australia. He was buried at East Perth Cemetery. His descendants erected a lych-gate at St Mary's Church, Middle Swan, in 1959 to commemorate the centenary of his association with the district. 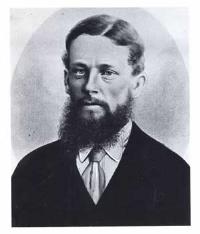 Charles Ferguson in 1876 - from "Dearest Isabella: The life and letters of Isabella Ferguson 1819-1910" by Prue Joske, University of Western Australia Press, 1989

Charles William Ferguson was born in 1847 at Perth, W. Australia, Australia. He was put in charge of the family property in 1863. See Dr. John Ferguson for history of the vineyards. By 1914, there were 150 acres planted with wine grapes and the vintage was 40,000 gallons. The property was one of three large vineyards in the area which were producing large amounts of wine for sale and export at this time. Charles lived there until he retired in 1911 when he went to live in Mt. Lawley, a suburb of Perth. He married Dora Viveash in 1876. Charles William Ferguson died in 1940 at Perth, W Australia, Australia. 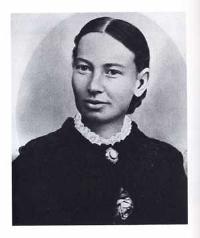 Dora Viveash 1876 - from "Dearest Isabella: the life and letters of Isabella Ferguson 1819-1910" by Prue Joske, University of Western Australia Press, 1989.
Her married name was Ferguson. Dora Viveash was born circa 1856. She married Charles William Ferguson, son of Dr John Ferguson and Isabella Maxwell, in 1876. Dora Viveash died after 1926.

M, b. 28 April 1841, d. 1924
John Maxwell (Johnny) Ferguson was born on 28 April 1841 at Dundee, Scotland. He was also known as Jack. He was educated at Dundee Seminary as a day student and boarded with his aunt Annie Ogilvie (Isabella's sister). He sailed with his older sister, Elizabeth in March 1853 on "Dido" which was wrecked at sea, but all passengers were safe. Johnny developed a passion for sailing, and spent 10 years in the Merchant Navy. He returned to Western Australia in 1867. He married Susan Finnerty in 1872. John Maxwell (Johnny) Ferguson was involved in a number of enterprises. In 1876, after supervising the building of a 3-masted schooner of 236 tons, Airlie, at the Tay Shipbuilding Company in Dundee, he became a coastal trader, and made trips to Shanghai, Mauritius and South Australia. After Airlie was sold in 1881 he established a brewery and later became a partner with William Moore, operating as general merchants in Fremantle. In 1890 he established his own business in Perth with several area branches. He served as Justice of the Peace from 1899 to 1905. His wife, Susan, died in 1889. He married Grace Fergusson on 2 April 1891 at Presbyterian Church, Perth, Scotland. John Maxwell (Johnny) Ferguson died in 1924 at Perth, W. Australia, at age 83. Thirteen of his fourteen children were then living.

M, b. 1840
Lionel Boyd Lukin was born in 1840 at Deepdale, Toodyay, Australia. He married Isabella (Tib/Bella) Maxwell Ferguson, daughter of Dr John Ferguson and Isabella Maxwell, on 12 February 1875. Lionel Boyd Lukin was a member of the Toodyay Agricultural Society and Race Club and was made a Justice of the Peace in 1876.

F, b. 1845, d. after 1918
Margaret Elvire Hammersley was born in 1845 at Guildford, Western Australia, Australia. As of 29 February 1876,her married name was Forrest. She married Lord John Forrest, son of William Forrest and Margaret Guthrie Hill, on 29 February 1876 at St. George's Cathedral, Perth, Western Australia. Margaret Elvire Hammersley died after 1918.