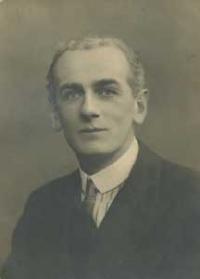 Lt.-Col. George Hamilton Ogilvie M.C. was born on 20 February 1888 at Westlands, Broughty Ferry, Dundee, Forfar (Angus), Scotland. His middle name, Hamilton, is undoubtedly after Hamilton Maxwell, his first cousin, born 1861, nephew of Harriet and George Ogilvie, and also the grandson of Dr. John Maxwell. Click on icon above to see a photo of George with his nephew, Geordie in Ogilvie dress tartan kilts. Click on 2nd icon to see George, age 5, photographed in "Little Lord Fauntleroy" suit. George Ogilvie was educated at Repton Grammar School, Edinburgh University and, from 1909-11, at New College, Oxford to read Forestry as a probationer for the Indian Forest Service. He left Oxford before taking his final exams to work for the IFS in Burma. Note: In 1864 the Government of India established the Indian Forest Service. The IFS managed the vast government forests of India and acted as a guide and model for the broader empire forestry movement, one of the precursors to modern environmentalism. He began military service on 15 January 1915 with the Gurkha Rifles. As Lieutenant/Acting Captain and Adjutant of the 2nd/3rd Ghurka Rifles he served in Gallipoli in 1915, Egypt 1915-16, Mesopotamia 1916 and in Palestine 1917-18. On 23 October, 1918 George was honoured by King George V and mentioned in the Despatches for "gallant and distinguished service in the Field". He was awarded the Military Cross on 3 June 1919. He married Evelyn Helen Mary Scarlett, daughter of John Edwin (Jack) Scarlett and Annie Elizabeth Byner, on 4 July 1936 at London, England. Lt.-Col. George Hamilton Ogilvie M.C. died on 11 October 1943 at Wolsey Cottage, Swallowfield, Reading, Berkshire, at age 55 of a pulmonary embolism. Death certificate on file.

Dr. John William Ogilvie FRCS was born on 15 April 1938 at Swallowfield, Reading, Berkshire. He attended Christ's Hospital School and Corpus Christi College, Oxford. He studied medicine at Guy's Hospital, London, in 1961, where he became a Fellow of the Royal College of Surgeons (FRCS). John had an insatiable curiosity, and was never satisfied with simple answers. He was interested in biology and in the interconnectedness of all life forms. Even at a young age he would find a patch of soil where he would plant seeds and watch them grow. John collected butterflies, moths and all kinds of insects to learn about their unique role in the natural world. He understood only too well the delicate balance between modern and technology and nature. He was concerned over the disappearance of butterflies in the countryside caused by farming methods that led to a dramatic reduction in the number and variety of wildflowers. His concern led him to study the problem and find ways to bring the butterflies back. He was a specialist in general surgery and later switched to medicine. He died on 28 November 1998 at Hitchin, Hertfordshire, England, at age 60. His death was caused by a ruptured aortic aneurysm complicated by a stroke and heart attack. His body was cremated and his ashes were spread over the English countryside which he loved so much. 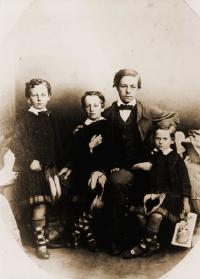 George Ogilvie was born in June 1851 at Dundee, Forfar (Angus), Scotland. He attended St. Andrews University. He married Harriet Gordon, daughter of John Gordon and Harriet Anne Hoile, on 30 August 1876. George Ogilvie was a partner with J & J Ogilvie, Solicitors. In addition he was a Justice of the Peace and Honorary Substitute Sheriff. George Ogilve lived at Westlands, at the corner of Albany Road and Fairfield Road. To see a photo of Westlands, click on the icon above. Click on the 2nd icon to see Max Balfour's painting of Westlands. Throughout his life, Max was a frequent visitor to the Ogilvies in Broughty Ferry. George Ogilvie appeared on the census of 1891 as Solicitor, age 39, head of household, living at Westlands,(now No. 9) Albany Road, Dundee with his wife Harriet, sons Henry, age 8, scholar, George Hamilton 3 and Philip Gordon age 1. Also in the household are: Jessie Clinton Cunningham, Governess from England; Mary Kay, Cook; Elizabeth Duncan, Housemaid; Euphemia McRobb, Laundry Maid; Mary Anne Stephen, Table Maid; Rachel Scott, Nurse; and Annie Mackintosh, Nurse. George is also listed in the 1901 census at the same address. He died of a cerebral hemorrhage on 1 January 1912 at age 61. He was buried on 5 January 1912 at Barnhill Cemetery Section G lair No. 218, alongside his wife, Harriet. A memorial to their son, William, reads "In loving memory of WILLIAM EDMOND OGILVIE 2nd Lieutenant 9th Border Regiment Pioneers who fell in France 27 September 1915 aged 21 years". Tombstone carved by sculptor, Eric Gill. Click on icon to see photo of grave. Death certificate on file. 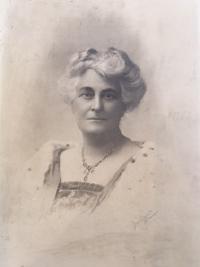 Harriet Gordon
Harriet Gordon was born in May 1851 at Broughty Ferry, Forfar (Angus), Scotland. As of 1876,her married name was Ogilvie. She married George Ogilvie, son of John Ogilvie and Annie (Anne) Maxwell, on 30 August 1876. Harriet Gordon died on 28 March 1914 at Broughty Ferry, Dundee, Forfar, Scotland, at age 62. She was buried on 1 April 1914 at Barnhill Cemetery in Dundee. Harriet and her husband, George, are buried in Section G lair No. 218. The tombstone was carved by sculptor, Eric Gill. Harriet was the proprietor of lairs 217, 218 and 219. The inscription on the gravestone reads: In Loving Memory of GEORGE OGILVIE Born June 1851 Died New Year's Day 1912 also of his wife HARRIET GORDON Born May, 1851 Died March 28, 1914". 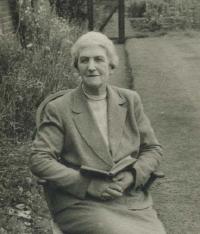 Juliet Ogilvie was born on 9 January 1878 at Broughty Ferry, Dundee, Forfar, Scotland. She was educated at home and at St. Leonard's School, St. Andrew's 1892-5. Juliet attended University College, Dundee 1895-96, Somerville College, Oxford, 1896-1900 (Clothworks Scholar) where she received Hons. Mods., Classics, Class III, 1898; Hons., Lit. Humanities, Class II, 1900. She did not earn her B.A. from Somerville until 1926, probably because she returned to Dundee to help her mother with her younger brothers. She did some occasional tutoring at Oxford. She was a member of the University Women's Club in London. She was a volunteer masseuse during World War I, at Dulwich Hospital and the Russian Hospital for Officers from 1915-17. Juliet was Personal Assistant, Hours of Labour Section for the Ministry of Munitions in 1917; Administrative Assistant, Canteens for Munition Factories Dept., Ministry of Munitions, 1918. She was a temporary Assistant Mistress for the boys' preparatory school in Farnham, 1922-23; a member of the Women's Committee, National Institute of Industrial Psychology, 1932 and of the Vocational Guidance Committee, 1935-57. Juliet published a book of her poems entitled "Ad Vitam" in 1923, and was contributor to Anglo-Portuguese News. She traveled extensively and lived in Burma and in Portugal for a length of time. Juliet used to say that the reason she never married and did not pursue a career was because she helped bring up her 6 younger brothers. She devoted her later years during and after World War II to helping care for her nephew and neice, John and Rachel Ogilvie, whose father died in 1943 when the children were 6 and 4. She died on 24 Aug 1959, at Guy's Hospital in London, of sinus cancer. Her body was cremated and her ashes are interred at Barnhill Cemetery in Dundee in Section G, Lair 218, beside the graves of her mother and father, George and Harriet. Click on icon above to see the gravesite. 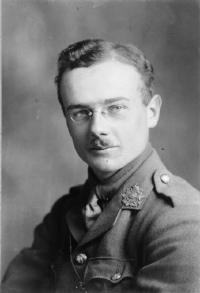 Photo is from the Imperial War Museum Collections.

William Edmond Ogilvie was born in 1894 at Broughty Ferry, Dundee, Scotland. William Ogilvie enlisted in the Public Schools Corps on outbreak of war in August 1914. In October he transferred to the Inns of Court Corps and received his commission on 11 January 1915. He was 2nd Lieutenant in the 9th Battalion, Border Regimentand fought in the Battle of Loos. He was killed by the accidental discharge of a rifle at Bayonvillers in France. Lt Ogilvie is buried at Hangard Community Cemetery Extension. Located north of Paris near Amiens, Hangard is a village 5 kilometres south of Villers-Bretonneux. Hangard Communal Cemetery is a little east of the village on the north side of the road to Demuin and the Extension is on the west side of the Communal Cemetery. Cem. Ref No II G 20.


The memorial plaque at his parents' gravesite in Barnhill Cemetery, Broughty Ferry reads "William Edmond, 2nd Lieut. 9 Border Regiment fell in France 27 September 1915 age 21 years". William is also commemorated on a plaque in St Luke's Church, Broughty Ferry. Excerpt from H.C. Wylly's account of the Border Regiment during September, 1915, taken from his book The Border Regiment in the Great War. "The 9th Battalion disembarked at Havre early on the morning of the 4th of September- strength 30 officers and 935 other ranks - and was pushed on early next morning in two trains for the Amiens area, was detrained in the middle of the night at Longueru, and marched to Flesselles, were was the headquarters of the 22nd Division. Here various contradictory orders were received, while many rumours as to probable moves were in circulation; but on the 11th the Battalion left Flesselles and marched some 13 miles to La Neuville for attachment to the 18th Battalion, and here was employed on pioneer duties of all kinds. Here, too, the Battalion seems to have had its first casualty, Second Lieutenant A.F. Sandeman being slightly wounded. Before the end of the month, several moves had taken place - from La Neuville to Herleville, thence to Bayonvillers, where one man was wounded and Second-Lieutenant Ogilvie was killed by the accidental discharge of a rifle." As part of the Imperial War Museum's WWI centenary project, William was featured on their website with this photograph on 11 Jan, 2012.