M, b. circa 1885, d. circa 1970
Rev. Malcolm Venables was born circa 1885. He married Florence (Flo) Ogilvie, daughter of William Maxwell Ogilvie and Mary Anna Wolff, on 14 April 1913 at the Church of Harrow Weald by the Bishop of London. Rev. Malcolm Venables was a Cannon at 4, The Cloisters, Windsor Castle and a Master at Felsted School in Essex. in 1914. He died circa 1970. 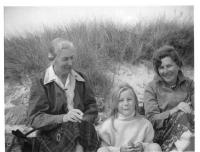 Elsie Carlisle with her daughter, Tony, and granddaughter Catriona on the beach at Iona, c1959.

Elsie Ogilvie was born in 1890 at Valparaiso, Chile. Click on the icon above to read Elsie's memoirs. As of circa 1917,her married name was Carlisle. She married Dr. "Henry" George Carlisle in 1917. Elsie Ogilvie died in 1959 at age 69. 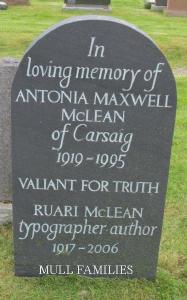 Geoffrey Hall with his wife, Mary, and daughter, Virginia, at the launch of Herald, Leith 1974.

Mary Carlisle was born on 9 May 1921. She was a Wren in WWII. Click on the icon above to see War Record. Click on the next icon to read Mary Hall's letters to close relatives. She married Rear Admiral Geoffrey Hall RN in 1945 . Geoffrey met his wife Mary through his friendship with Ruari (pronounced "Rory") McLean. Ruari married Mary's sister, Tony. Mary Carlisle died on 12 December 2010 at Louth, Lincolnshire, at age 89.

Ruari McLean was born on 10 June 1917 at Minigaff, Scotland. He was a typographer and graphic designer. He married Antonia "Tony" Maxwell Carlisle, daughter of Dr. "Henry" George Carlisle and Elsie Ogilvie, in 1945. Ruari McLean died on 27 March 2006 at Stirling, Scotland, at age 88. To see The Times obituary click on icon above. 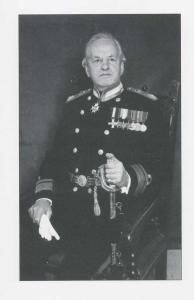 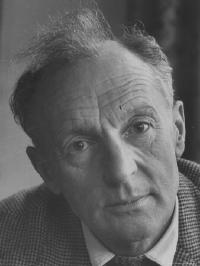 (Arthur) Joyce Lunel Cary was born on 7 December 1888 at Londonderry, N. Ireland. He was educated at Clifton College, and then decided to take up painting. He spent time in Paris where he studied the Impressionists and saw some early work of Matisse. He studied art in Edinburgh but decided he would not make a career of painting, though he did draw and paint throughout his life. In 1909 he went to Trinity College, Oxford, where he met Heneage Ogilvie, brother of his future wife, Gertie. He began military service in 1912 as a Red Cross volunteer during the First Balkan War, working in some gruesome battles in Montenegro. He was Assistant District Commissioner in Nigeria when the war broke out. War was waged in Africa between British and German colonies, and Joyce was shot and nearly killed fighting the Cameroons in 1915. He was sent home on 3 months sick leave in 1916, reunited with Gertie. He married Gertrude Margaret Ogilvie, daughter of William Maxwell Ogilvie and Mary Anna Wolff, on 1 June 1916. (Arthur) Joyce Lunel Cary was writing short stories for magazines like the Saturday Evening Post, which encouraged him to think he could live by writing. In 1929 the great stock exchange crash forced him to begin publishing and his first published novel, Aissa Saved, came out in 1932 when he was 44. It sold very few copies and brought in no cash to speak of. His third book, The African Witch, was a Book Society Choice, which drew attention to Joyce and his work, and by the time the war came in 1939 he had published 5 novels, 4 of them based on his experiences in Africa.

Films were made of The Horse's Mouth and Mister Johnson. He died on 29 March 1957 at London, England, at age 68; In 1955 Joyce began getting symptoms of motor neuron disease, which gradually destroyed him until he died, at home in Oxford, at the age of 68. His head remained clear, and he worked to within a few days of his death.

Tristram 2002
Tristram Ogilvie Cary was educated at the Dragon School, Oxford; Westminster School, London (King's Scholar); Christ Church, Oxford (Exhibitioner) and Trinity College of Music, London. He was born on 14 May 1925 at Oxford, England. He began military service in 1943 serving Royal Navy specializing in radar and thus receiving training in electronics. During his war service Cary independently developed the idea of what was to become tape music. He ended military service in 1946 and began experimenting with electronic music. He was writing music and teaching and developed his first electronic music studio. From 1954 he gradually received more commissions and composed concert works and scores for theatre, radio, film, and TV. In 1967 Cary founded the electronic music studio at the Royal College of Music. When he moved to Australia in 1972, he incorporated his equipment into the expanding teaching studio at Adelaide University, where he taught up until 1986. Cary was also a founder Director of EMS (London) Ltd, and codesigner of the VCS# (Putney) Synthesiser (which Pink Floyd used on their 1973 concept album The Dark Side of the Moon), and other EMS products. He is best known for the music he composed for the film The Ladykillers in 1955. His compositions number in the hundreds, however, including orchestral and works for theatre, films, radio and television; and electroacoustic works. His book Illustrated Compendium (Dictionary in the American version) of Musical Technology was published in May 1992. Cary was awarded a Doctor of Music award by Adelaide University. In 1991 he was awarded the Medal of the Order of Australia (OAM) for services to Australian music. In 1999 he received the South Australia Great Music Award and Symphony Australia commissioned a new work - Scenes from a Life to mark his 75th birthday in 2000. In 2005 Cary received the Adelaide Critics Circle 2005 Lifetime Achievement Award. Tristram is considered to be the father of electronic music.