M, b. 24 September 1890, d. 11 November 1971
A.P. (Alan Patrick) Herbert was also known as Sir Alan Patrick Herbert. He was born on 24 September 1890 at Ashstead Common, Surrey. He died on 11 November 1971 at age 81. He was knighted in 1945 and made a Companion of Honor in 1970. Few authors of the twentieth century can claim that through their published fiction they have directly or indirectly helped to bring about significant changes in the laws of Britain. A. P. Herbert was one of those few. The vitality and exceptionally wide range of his work are remarkable: he is perhaps best known as a humorist and contributor to Punch magazine, with which he was associated for sixty years; but he also wrote successful musical comedies, poetry, nonfiction, and novels. Much of his writing reveals his unrivaled talent for comedy and drama, and even his serious treatment of what he saw as injustice and unnecessary confusion was always applied with penetrating thought, mockery, and satire that prove in the end to be more effective than mere condemnation.

The eldest of three brothers, Alan Patrick Herbert was born at Ashstead Common, between Epsom and Leatherhead in Surrey. His father, Patrick Herbert, who had been born in County Kerry, Ireland, came from an Irish Catholic background and had attended Trinity College, Dublin, during the same period as Oscar Wilde. Herbert's mother, Beatrice Selwyn Herbert, whose family had included several Anglican bishops, died when her eldest son was only seven. The family moved to London, where Herbert's father worked in the India Office. The future writer was sent to The Grange, a preparatory school at Folkestone, and in 1904 he went on to Winchester, one of the oldest English public schools. He remained there for six years, and during that time he began writing poetry. His compositions earned him the King's Gold Medal for English verse in addition to the Silver Medal for English speech and a prize for Latin verse. Next came four years, 1910-1914, at New College, Oxford, where he read classics and obtained a degree in law.

The year he graduated from the university saw the outbreak of World War I, which led Herbert to join the Royal Naval Volunteer Reserve. He married Gwendolen Harriet Quilter, a cousin of the composer Roger Quilter, on 31 December 1914; they would have a son and three daughters. By May 1915 he was in Gallipoli with the British forces; he was wounded in action and later decorated. Somehow he still found time and energy to write, and before the end of the war he published two collections of war poetry in Britain.

The war provided the inspiration for Herbert's first and most serious novel, The Secret Battle (1919). "I did not descend to prose," he wrote characteristically in his 1970 autobiography, A. P. H.: His Life and Times, "till 1918." Having written the novel, he was summoned to the office of the London publisher Methuen, where he received the classic treatment meted out to young unknown writers who might feel dangerously optimistic. The Secret Battle had been read by the experienced essayist E. V. Lucas, who pointed out its considerable literary merit but could promise no commercial success. The author later borrowed a phrase from Noel Coward: the book, he said, was un flop d'estime. The novelist Arnold Bennett praised it, however, and Prime Minister David Lloyd George recommended it to his minister of war, Winston Churchill.

The novel describes the life of the hero, Harry Penrose, in the British army at Gallipoli and in France. In describing the unimaginable hardships of these campaigns Herbert wrote from firsthand experience. Harry is a man who always had been aware of his desperate lack of confidence, dedicating his life to overcoming it. Harry is also a hero, but owing to the jealousy of various officers and the overwhelming military bureaucracy, he is falsely accused of being a coward and a deserter; he is court-martialed and finally shot by his own men. Churchill agreed with the lesson taught by the author: the conduct of courts-martial must be improved and made truly fair. The novel came into its own in 1928 when Churchill wrote a foreword to the third edition; later Field Marshal Bernard Montgomery wrote of his great admiration for it. Significantly, as late as 1993 a posthumous pardon was granted to former members of the British army who had suffered the same fate as Harry Penrose in World War I.

Herbert's sense of fairness and his imaginatively radical approach to the solving of social abuses made him wish to reform many traditional practices which he knew to be wrong, and he participated actively in public affairs throughout his life. He was called to the bar in 1918, and although he did not practice as a barrister, he gained valuable experience during two years spent as private secretary to a member of Parliament who was himself a barrister. From 1935 to 1950 Herbert represented Oxford University as an Independent member of the House of Commons and no doubt would have continued to do so had university seats not been abolished. He also continued to use his writing to expose and mock injustices as well as to entertain.

Despite Herbert's publishing activity in so many fields, it is the novel published in 1930, The Water Gipsies, that has remained his best-known book. No other tale expresses in such detail, with so much understanding, humor, and gentle criticism, the lives of the many contrasting people who lived and worked by the river Thames. The author describes the middle-class Raven household and in particular the life and aspirations of their maid, Jane Bell, whose father and sister live on the barge Blackbird. Jane reluctantly marries Ernest, a militant left-winger; after he drowns, she finds a happier marriage with Fred. Herbert was a keen observer of the ways in which the various social classes lived and worked, and the reader inevitably sympathizes with characters such as Jane, who work hard in service, rather than with those such as George Gordon Bryan, the painter who, like the other aristocrats, appears almost as a caricature. Bryan is attracted to Jane, whom he paints, but because of class issues he lacks the courage to commit himself to her and feels guilty. Bryan escapes from her and more particularly from his upper-class fiancée by buying a boat, The Water Gipsy, and sailing away. This moving and humorous book includes memorable portraits of Jane's incorrigible father and her sister Lily, so different from Jane and drawn into what could be described briefly as "low life." Fellow authors Hilaire Belloc and John Galsworthy praised the novel, and H. G. Wells found it "human and true."

In 1934 Herbert published his next novel, Holy Deadlock, presented as farcical entertainment with the intent of making a serious point. It reveals the background against which the author worked so hard to obtain reform of the divorce laws. Mrs. Mary Adam decides she wants to marry Martin Seal, and therefore she must divorce her husband John, despite the romantic start of their marriage. The story traces, with much comedy, what the three people have to do to obtain a divorce without scandal, what the various members of the legal profession think and do, and what goes wrong. The absurdities of the contemporary divorce laws in Britain are ruthlessly exposed through a constantly entertaining narrative. Eventually those laws were changed--Herbert was an active proponent of the Marriage Bill that passed Parliament in 1936--and no book has been as important as Holy Deadlock in persuading the law officers and the appropriate government departments to pay attention to this social problem. In his autobiography Herbert quotes a 1934 letter from Rudyard Kipling saying that the novel "will be the reference work, as well as arsenal and magazine to draw on, for future work by men and women who have been driven more than half crazy by the existing state of things."

In his literary and political activities Herbert also paid attention to such varied issues as the tax on entertainment, the hope that authors could profit from library borrowings, the need to improve general English word usage and writing style, and the uses of a classical education. All aspects of entertainment were especially important to him since he had devoted many years of his life to the theater and to musical comedies. Herbert was also devoted to the water; he and his boat, Water Gipsy, served during World War II, first as part of the River Emergency Service, a fleet of private vessels on the Thames, and later as part of the Royal Navy.

Why Waterloo" (1952) is an historical novel about Napoleon's life on, and escape from, the island of Elba after his defeat and abdication in April 1814. Marie Walewska, Napoleon's Polish mistress, visits him, bringing their young son, Alexandre. His mother and his sister, Pauline, also arrive, and the social life of Elba becomes entertaining and colorful. Herbert quotes from many historical documents, from letters to ships' logs; the historical notes are more absorbing than the novel itself.

In 1968 Herbert published his last novel, the culmination of his lifelong passion for sailing and for the river Thames. This book was The Singing Swan: A Yachtsman's Yarn, named for one of the last sailing barges on the river; the boat plays a gallant part in the dramatic story involving an ambitious industrialist and many theatrical personalities. The real Singing Swan was also involved in complex activities on the river and around the coast, including the 1940 evacuation of Allied troops from the French port of Dunkirk on the North Sea. In his autobiography Herbert called this novel "a labour of love" and "a last salute to a noble breed," but the book received little attention from the critics.

Herbert was an outstanding member of his generation. On 19 April 1928 John Galsworthy wrote Herbert a letter full of praise, including a pronouncement with which readers today can still agree: Herbert was by "far the best humourist we have had for ages." If his theatrical work now belongs to the past, his few pieces of sustained fiction, plus the "near novels," to use his phrase, remain surprisingly relevant to later generations of readers, especially those interested in social history and those who want their novels full of action and laced with humor.

The Dictionary of Literary Biography online. 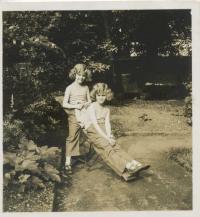 F, b. 1839
Her married name was Macaulay. Euphemia Beith Elder was born in 1839 at West Free Manse, Rothesay. She married Robert Sellar Macaulay, son of George Macaulay and Anne Spankie, on 31 July 1860 at Rothesay, Ayr.